Spiritual Horizons- providing you a place to call home
Would you like to react to this message? Create an account in a few clicks or log in to continue.

has any one mastered a particular skill? like with mediumship we were taught to concentrate on the person through the third eye and ask through spirit for any messages for that person. I couldn't concentrate though I was not in contact with spirit.
are there any methods for clairaudience or any other of the clairs. With telepathy all you need is to think about the person and then you sense their presence around you, I send love mainly or block. Although I realise that these are only mind effects (that's the skeptic in me).

I've had some experiences with these special skills, but they were few, so i am far away from mastering one of them. I've had telepathic experiences, mostly with people who i am close to, but on some occasions also with others. There were times when i knew what an other person would say or do, or even how they feel. Sometimes i said something right ahead of the other person and they were like "i was going to say/do the same thing, it's like you read my mind". On the few occasions when i had telepathic experiences, i just sensed a gut feeling, accompanied by a short time ability to focus really hard on the other person's mind. This focusing ability only lasted for a few seconds and it was almost like feeling a bit of electricity going through my head, but in a pleasant way.

With telepathy you have to be careful and ask yourself if it's the right thing to develop this skill. Because others may consider what you are doing is unfair to them. And i also think it is. I think one develops telepathy through practice and once developed, it would only be fair to use it with a person who also has developed telepathy, and if they approve. 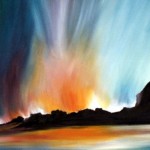